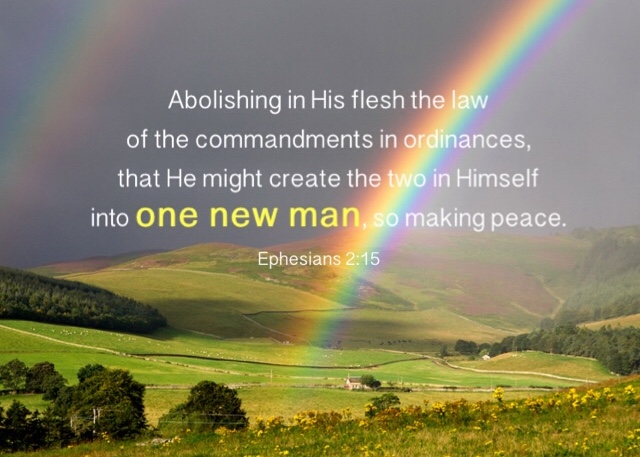 by Marshall Beeber
Ephesians  2:15 - by abolishing in his flesh the law with its commandments and  regulations. His purpose was to create in himself one new man out of the  two, thus making peace.
The Apostle Paul stated that Jews and Gentiles in Messiah Jesus are now "One New Man"1  through Messiah's atoning sacrifice. Some Messianic Jewish critics of  Christian teachings have faulted the Church for removing most Jewishness  from worship, and creating an atmosphere biased against Jewish cultural  and religious identity.
In  an attempt to create a theology unbiased towards a Messianic Jewish  identity, a false "One New Man" teaching has encouraged Jewish and  Gentile believers alike to be Torah observant, thus forging an unbiblical "One New Man" concept with a Messianic Jewish bias. The  result of this interpretation has been one of greater problems within  the movement and growing criticism by Christian leadership throughout  the world.
I  do not think the false "One New Man"theology was intended to be in  opposition to the true Gospel, but the consequence of adopting this  theology had a "negative ripple effect" throughout the entire movement.  The original vision of the Messianic Jewish Movement (MJM) was designed  for Jewish believers with accommodations for Gentile believers. In time  many more Gentiles flocked to Messianic congregations than originally  intended.  The leadership of the MJM,  knowing it faced a crisis without  Messianic Gentile support diverged from their intended mission and  welcomed Messianic Gentiles into the fold with open arms.

Most  Messianic Gentiles have taken on the same rabbinic liturgical trappings  that their Messianic Jewish counterparts did.  By doing so Messianic  congregations took a radical course that could only end in failure.  Their ability to attract new Jewish believers was dramatically decreased  by their false assumption that new Jewish believers would be attracted  to worship services with Gentiles wearing liturgical garb and  worshipping in what they perceive to be an absurd manner. Today it is  highly improbable that Jews would attend such services. But Messianic  leadership could not accept that their mission to reach unsaved Jews had  failed. They continue to preach about their mission to unsaved Jews but  refuse to accept that their methodology and basic Torah observances are  not true to New Covenant standards.
Another big problem is that many Gentile Messianic believers could care  less about new Jewish believers attending their services. They have  their fantasy Messianic personas and support groups that seemed to have  attracted many members from the Seventh Day Adventist and Hebrew Roots  crowd.  Today we now see congregation's totally comprised of Messianic  Gentiles with the full support of MJM organizations.

Recently  some Messianic Jewish leaders openly expressed their reservation on the  course they have taken.  After years of Messianic worship and Torah  Observance, the movement seemed to have attracted mostly Gentile  Christians and alienated new prospective Jewish believers.   Some  Messianic leaders have correctly understood the errors of the past and  have shifted their worship to non-Torah observance, with liturgy and  music that appeals to both Messianic Jewish and Christian tastes.  A  successful Messianic pastor in Philadelphia recently stated that most  Jews today are secular and find little affinity for the Messianic  liturgy promoted in the MJM today.  His congregation of Jewish and  Gentile believers lacks the Jewish liturgical trappings and succeeds in  creating a harmony off both modern Jewish and Gentile cultures.

It  is my opinion that there still exists a very great potential within the  Messianic Movement for Jewish and Gentile believers to form a truly  biblical "One New Man" theology and lifestyle, but a transformation must  occur within the leadership of the Messianic Movement for the Spirit to  move in this direction.  The transformation may end what we know as the  "Messianic Jewish Movement", replacing it with a more Spiritually  empowered and biblically sound "One New Man Movement" uniting Jewish and  Gentile believers together in Spirit and deed.

Below are  links to commentaries addressing issues in the "One New Man" debate.  I  do not necessarily endorse the views of the authors, but have cited them  to bring special attention to their observations and suggestion for  change within the Christian Church and Messianic Jewish movement alike.
Reference Links
One New Man; by Sid Roth
One New Man Transfroming Power of Unity for Jew and Gentile: by Sid Roth
Reconciling Christians & Jews; by CBN Ministries
Please  note:  In recent years the leadership within the Messianic Jewish  Alliance (MJAA) has been making significant strides in addressing the  problem of anti-Pauline doctrine within its ranks.
Return To Grace Studies
Send Your Thoughts To MLC!
Back to content