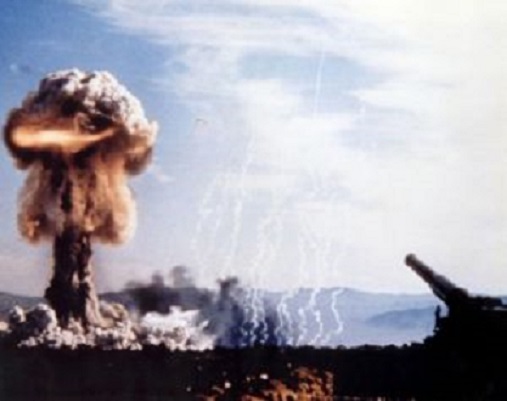 An Introduction
"The Prophetic Visions of Zechariah"  provides a glimpse "above history and time", peering into Israel's  immediate and far distant future. Zechariah, like Jeremiah and Ezekiel  was a priest as well as a prophet.  His prophetic writings focus  primarily upon the restoration of the second temple in Jerusalem after  the 70 year Babylonian captivity, but also foretells the coming of the  Messiah to suffer an atoning death and later to reign as King over all  the Earth. On the 24th day of the 11th  month (Shebat), in the second year of Darius (536 B.C.),  Zechariah  received the first of his seven visions. In the seventh vision, events  leading up to Messiah's return are vividly portrayed. Zechariah envisioned a  future time when all the nations of the Earth will turn against Judah  (Israel), laying siege against Jerusalem. Within this prophecy is the  prediction of a plague that will fall upon the armies that fight against  Jerusalem.

Zechariah 14:12  This is the plague  with which the LORD will strike all the nations that fought against  Jerusalem: Their flesh will rot while they are still standing on their  feet, their eyes will rot in their sockets, and their tongues will rot  in their mouths. (New International Version)

A Compelling Interpretation of Zechariah's Prophecy

This  prophecy seemed like a horrific fantasy until the dawn of the nuclear  age.  In the 1970s Samuel Cohen, a nuclear physicist, invented a new  tactical nuclear weapon called the "neutron bomb" which would have the  exact effect that Zechariah's prophecy stated.
Neutron Bomb Definition:

"Also  called ENHANCED RADIATION WARHEAD, specialized type of small  thermonuclear weapon that produces minimal blast and heat but which  releases large amounts of lethal radiation. The neutron bomb delivers  blast and heat effects that are confined to an area of only a few  hundred yards in radius. But within a somewhat larger area it throws off  a massive wave of neutron and gamma radiation, which can penetrate  armor or several feet of earth. This radiation is extremely destructive  to living tissue.
Due  to its short-range destructiveness and the absence of long-range  effect, the neutron bomb would be highly effective against tank and  infantry formations on the battlefield but would not endanger cities or  other population centers only a few miles away. It can be carried in a  Lance missile or delivered by an 8-inch (200-millimetre) howitzer, or  possibly by attack aircraft. In strategic terms, the neutron bomb has a  theoretical deterrent effect: discouraging an armored ground assault by  arousing the fear of neutron bomb counterattack. The bomb would disable  enemy tank crews in minutes, and those exposed would die within days.  U.S. production of the bomb was postponed in 1978 and resumed in 1981."Source: https://www.britannica.com/technology/neutron-bomb

The  neutron bomb is now part of the arsenal of most countries armed with  nuclear weapons. After a recent threat of Israel's annihilation by the  leader of Iran in 2006,  Israel admitted having an arsenal of nuclear  weapons.  The types of weapons Israel possesses were not specified.

Some  theologians believe the plague will emanate directly from God's angels  rather than being of human invention.  They admit the plague resembles  the effects of a "neutron bomb", but refute the prophetic connection  with nuclear weaponry.  In support of the "Neutron Bomb Connection" in  Zechariah 14:12, some propose certain human inventions to be "Wrought of God" when fulfilling a purpose in God's prophetic plan. Samuel Morse, inventor of the telegraph made such a statement upon its inception. The  Zechariah 14:12 topic remains an intriguingly credible bit of prophetic  speculation.  See the referring links below for details.
Referring Science Links
Physics and Medical Effects of Enhanced Radiation Weapons - Research Gate
Interview with "neutron bomb" inventor; by Tribune Review
The End Times According To Zechariah; Gracethrufaith.com
Click for Zechariah Study Sections Below
Introduction
Page 1: Chapters 1 - 3
Page 2: Chapters 4 - 6
Page 3: Chapters 7 - 10
Page 4: Chapters 11 -14
Return To Science & The Bible Studies
Send Your Thoughts To MLC!
Back to content