Messianic Literary Corner
×
Go to content
New Evidence For The Shroud Of Turin!
by Marshall Beeber 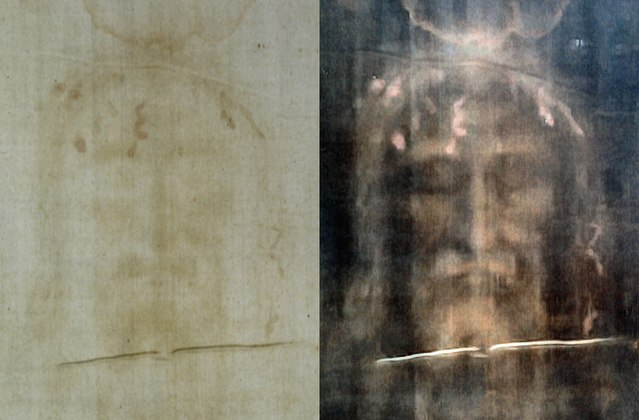 Scriptural Reference To The Shroud
John 19:38-42  After this Joseph of Arimathe'a, who was a disciple of Jesus, but  secretly, for fear of the Jews, asked Pilate that he might take away the  body of Jesus, and Pilate gave him leave. So he came and took away his  body. Nicode'mus also, who had at first come to him by night, came  bringing a mixture of myrrh and aloes, about a hundred pounds' weight.  They took the body of Jesus, and bound it in linen cloths with the  spices, as is the burial custom of the Jews. Now in the place where he  was crucified there was a garden, and in the garden a new tomb where no  one had ever been laid. So because of the Jewish day of Preparation, as  the tomb was close at hand, they laid Jesus there.

John 20:1-10  Now on the first day of the week Mary Magdalene came to the tomb early,  while it was still dark, and saw that the stone had been taken away  from the tomb. So she ran, and went to Simon Peter and the other  disciple, the one whom Jesus loved, and said to them, "They have taken  the Lord out of the tomb, and we do not know where they have laid him."  Peter then came out with the other disciple, and they went toward the  tomb. They both ran, but the other disciple outran Peter and reached the  tomb first; and stooping to look in, he saw the linen cloths lying  there, but he did not go in. Then Simon Peter came, following him, and  went into the tomb; he saw the linen cloths lying, and the napkin, which  had been on his head, not lying with the linen cloths but rolled up in a  place by itself. 8 Then the other disciple, who reached the tomb first,  also went in, and he saw and believed; for as yet they did not know the  scripture, that he must rise from the dead. Then the disciples went  back to their homes.
New Scientific Evidence
The  Shroud of Turin has been venerated for centuries as the true burial  shroud of Jesus of Nazareth.  A faint image of what appears to be a  crucified man is present on the linen, but no evidence of the image  being anything extraordinary could be seen with the naked eye. There was  no way of understanding the image's uniqueness until 1898, when the  Italian photographer, Secunda Pia, took the first photographs of the  Shroud. During the development of the photographic print, Pia noticed  the negative image on the Shroud looked like a photographic positive.
This discovery raised scientific interest that has continued to the present day. In1988  the Shroud was subjected to radiocarbon analysis and showed the cloth  to be 14th century in its origin.  The reason for the erroneous  radiocarbon dating is due to a rewoven backing or patch added to the  Shroud.  There is now conclusive evidence proving the sample used to  date the Shroud was actually taken from an expertly done rewoven patch  added in the middle ages.  More data from Los Alamos Laboratory in New  Mexico indicates the linen Shroud is actually much older than the  published date from the 1988 carbon tests.
Much of the new scientific evidence has risen from the"Shroud of Turin Research Project" or STURP,  a highly respected group of scientists who have dedicated themselves to  uncovering the scientific mysteries of the Shroud.  STURP members are  from these organizations:
Lockheed Corporation
U.S. Air Force Weapons Laboratories
Brooks Institute of Photography
Texas, Medical Examiner's Office
Oceanographic Services Inc
University of Colorado
Los Alamos National Scientific Laboratories
IBM
Western Connecticut State University
Nuclear Technology Corporation
Los Angeles County Museum
St. Agnes Medical Center
Oriel Corporation
Rocky Mountain Thermograph
New England Institute
U.S. Air Force Academy
Jet Propulsion Laboratory
Sandia Laboratories
Santa Barbara Research Center
Barrie Schwortz Studios
Research Conclusions
The  STURP team has revealing astounding data that now has convinced many  scientists of the miraculous origin of the image.  No medieval artist or  alchemist could have produced the results present in the Shroud.
Research so far has proven that:
·         The Shroud behaves as a photographic negative.
·         The Shroud encodes three-dimensional (3-D) data which corresponds to a three-dimensional body.
·         The image is without substance (not painted on), but rather is due to a chemical change within the        linen itself.
·         The  image exhibits clear evidence of rigor mortis with no evidence of  decomposition of the body, suggesting the body image occurred no later  than 36 hours after death.
·         The  Shroud image exhibits anatomical structures clearly not in contact with  the cloth and some skeletal structure, e.g., thus suggesting a type of  autoradiograph (X-Ray image).
·         Medical  radiation imaging has, by far, come the closest to reproducing the  totality of the image. Yet, the Shroud image remains an unduplicatable  mystery.
Much  of the recent research on the Shroud of Turin has been focused on the  determination of "how the image could have formed on the linen" and of  "what type of radiation could have formed the image"?  The answer to the  first question of how the image formed on the linen was fairly evident.  In addressing the second question of "what type of radiation formed the  image", there are various natural and supernatural theories that have  risen in attempting to solve this scientific mystery. Research indicates  the unknown radiation is "biophysical" in its nature.  Knowledge of  such "biophysical radiation" is currently beyond our scientific  understanding.
The scientific  evidence revealed in the image scorched on the Shroud of Turin certainly eludes to the miraculous resurrection of Jesus of Nazareth and provides  a tremendous witness to Jew and Gentile alike of God's omnipotence and  Jesus divine nature.
References
·  Image of Shroud of Turin by Shrowd of Turin Blog
·  Carbon 14 Dating by Shrowd of Turin Blog
·  Burial coins on eyes of Shroud image; by Daniel Porter
·  Radiological aspects of the Shroud of Turin (showing skeletal structure); by Dr. Alan Whanger
·  The Turin Shroud not flattened before image formed; by Mario Latendresse, Ph.D.
·  Shroud image theorized to be scorched by preternatural combustion; by JD Clarkson
·  Shroud image comparison movies; by CSST
· Shroud image theorized to be scorched by holographic biophysical radiation; by JD Clarkson
Return To Science & The Bible Studies
Send Your Thoughts To MLC!
Back to content