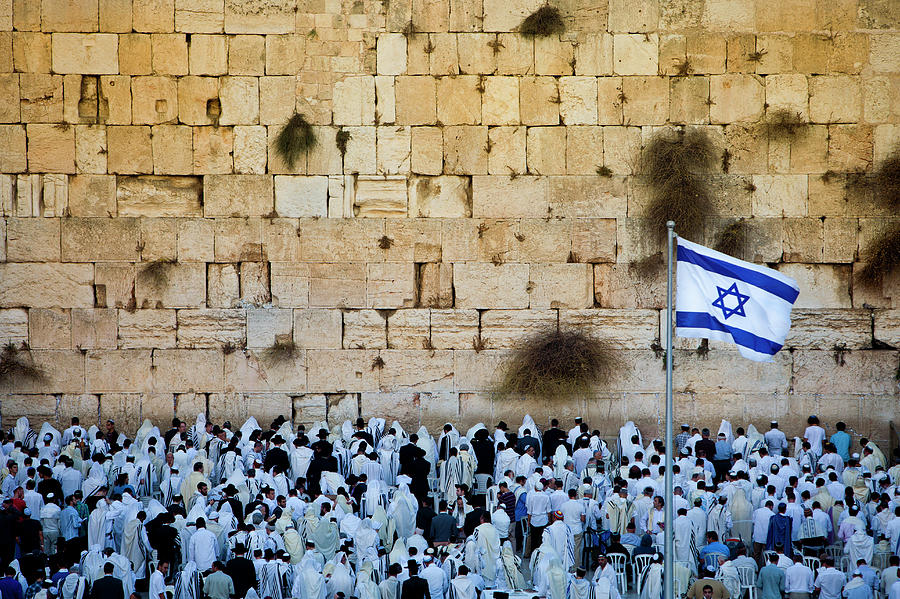 An Overview of the Study
The  purpose of this study is to better understand the many prophecies given  to the nation of Israel concerning the return or reign of the Messiah  in the "Latter Days". The term "Latter Days" is used in both New and Old  Covenant scriptures describing the events surrounding the coming of the  Messiah and the age following His coming.
This  study shows both Christians and Jews that the purposes of God toward  both the nation of Israel and the Church are inseparable, and in many  cases identical. The tremendous literary weight of these scriptures  leads us to an understanding that Yeshua (Jesus) himself will initiate a  reconciliation with Israel and will include the Church in many of the  blessings promised to Israel in the future.
The  mystery of what will become of both Israel and the Church is not really  hard to solve. It appears that the Lord will merge the Israeli national  identity and the Christian identity in that day.
The Study
Topic 1 - New Covenant reference to Israel's future
Romans 11: 25-27  I do not want you to be ignorant of this mystery brothers, so that you  may not be conceited: Israel has experienced a hardening in part until  the full number of Gentiles has come in. And so will all Israel be  saved, as it is written: "The deliverer will come from Zion; he will  turn godlessness away from Jacob. And this is my covenant with them when  I take away their sins."
Topic 2 -  The Messiah will have compassion on Israel and save them in a time of peril
Isaiah 11:10-17 In  that day the Root of Jesse will stand as a banner, for the peoples; the  nations will rally to him... He will raise a banner for the nations and  gather the exiles of Israel; he will assemble the scattered people of  Judah from the four corners of the earth.
Isaiah 30:19-26 O people of Zion who live in Jerusalem, you will weep no more. How gracious he will be when you cry for help.
Isaiah 40:1-5 Comfort,  comfort my people, says your God. Speak tenderly to Jerusalem, and  proclaim to her that her hard service has been completed, that her sin  has been paid for, that she has received from the Lord's hand double for  all her sins. A voice of one calling: "In the desert prepare the way  for the LORD ; make straight in the wilderness a highway for our God.  Every valley shall be raised up, every mountain and hill made low; the  rough ground shall become level, the rugged places a plain. And the  glory of the LORD will be revealed, and all mankind together will see  it. For the mouth of the LORD has spoken."
Isaiah 52:1-3 Awake,  awake, O Zion, clothe yourself with strength. Put on your garments of  splendor, O Jerusalem, the holy city. The uncircumcised and defiled will  not enter you again. Shake off your dust; rise up, sit enthroned, O  Jerusalem. Free yourself from the chains on your neck, O captive  Daughter of Zion. For this is what the LORD says: "You were sold for  nothing, and without money you will be redeemed."
Isaiah 54:6-8  The LORD will call you back as if you were a wife deserted and  distressed in spirit-- a wife who married young, only to be rejected,"  says your God. "For a brief moment I abandoned you, but with deep  compassion I will bring you back. In a surge of anger I hid my face from  you for a moment, but with everlasting kindness I will have compassion  on you," says the LORD your Redeemer.
Hosea 2:14-16  "Therefore I am now going to allure her; I will lead her into the  desert and speak tenderly to her. There I will give her back her  vineyards, and will make the Valley of Achor a door of hope. There she  will sing as in the days of her youth, as in the day she came up out of  Egypt. "In that day," declares the LORD, "you will call me 'my husband';  you will no longer call me 'my master.'
Zephaniah 3:14-17  Sing, O Daughter of Zion; shout aloud, O Israel! Be glad and rejoice  with all your heart, O Daughter of Jerusalem! The LORD has taken away  your punishment, he has turned back your enemy. The LORD, the King of  Israel, is with you; never again will you fear any harm. On that day  they will say to Jerusalem, "Do not fear, O Zion; do not let your hands  hang limp. The LORD your God is with you, he is mighty to save. He will  take great delight in you, he will quiet you with his love, he will  rejoice over you with singing."
Zechariah 8:13-15  As you have been an object of cursing among the nations, O Judah and  Israel, so will I save you, and you will be a blessing. Do not be  afraid, but let your hands be strong." This is what the LORD Almighty  says: "Just as I had determined to bring disaster upon you and showed no  pity when your fathers angered me," says the LORD Almighty, "so now I  have determined to do good again to Jerusalem and Judah. Do not be  afraid.

Topic 10 -  A new temple of worship will be built on Mount Zion upon Messiah's reign
Ezekial 43:6-7  While the man was standing beside me, I heard someone speaking to me  from inside the temple. He said: "Son of man, this is the place of my  throne and the place for the soles of my feet. This is where I will live  among the Israelites forever. The house of Israel will never again  defile my holy name--neither they nor their kings--by their prostitution  and the lifeless idols of their kings at their high places.

Ezekial 44:10  "'The Levites who went far from me when Israel went astray and who  wandered from me after their idols must bear the consequences of their  sin. They may serve in my sanctuary, having charge of the gates of the  temple and serving in it; they may slaughter the burnt offerings and  sacrifices for the people and stand before the people and serve them.

Topic 11 - World wide celebration of the Feast of Tablenacles (Succoth)
Zechariah 14:16-17  Then the survivors from all the nations that have attacked Jerusalem  will go up year after year to worship the King, the LORD Almighty, and  to celebrate the Feast of Tabernacles. If any of the peoples of the  earth do not go up to Jerusalem to worship the King, the LORD Almighty,  they will have no rain.
Return To Prophecy Studies
Send Your Thoughts To MLC!
Back to content